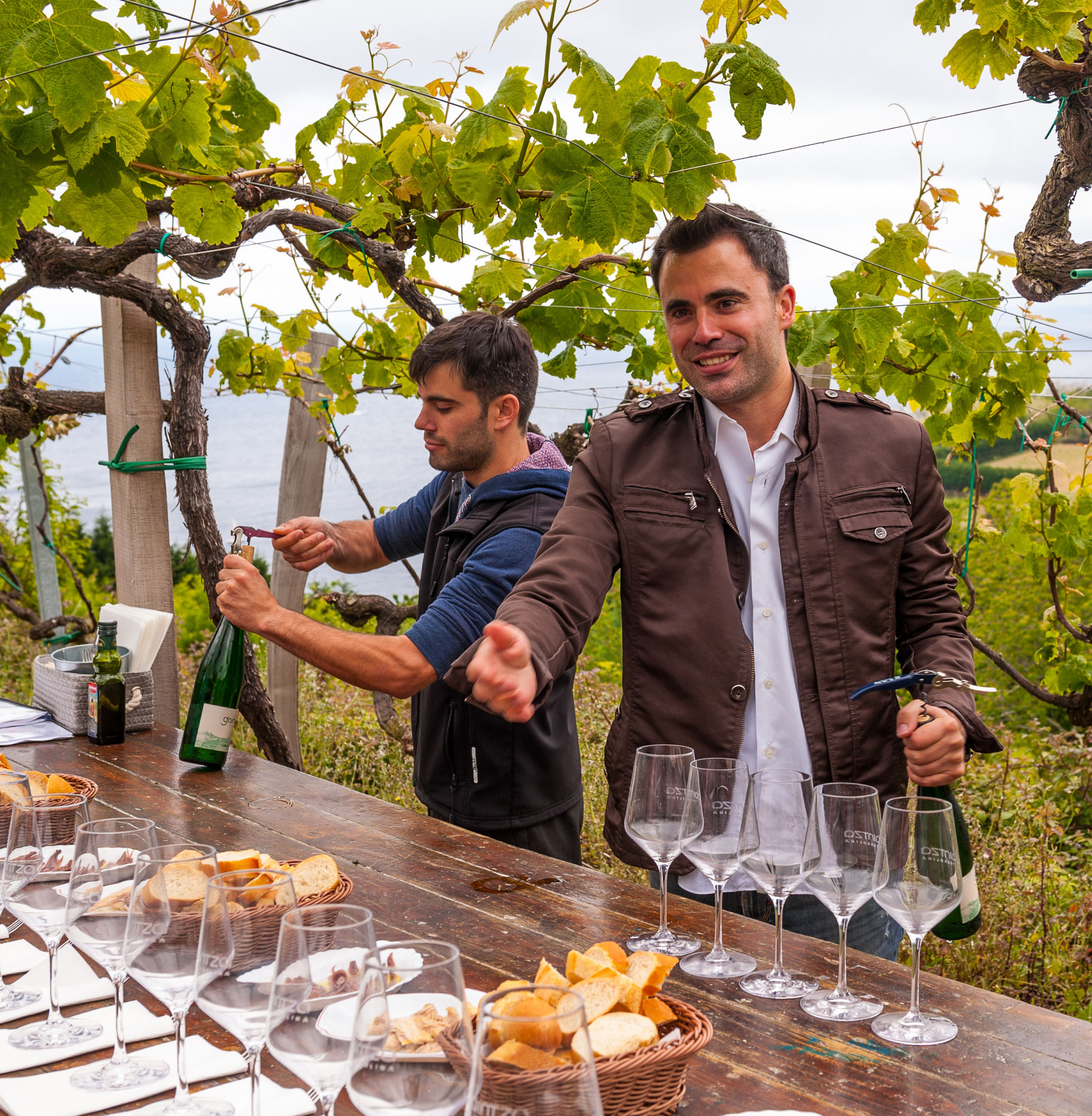 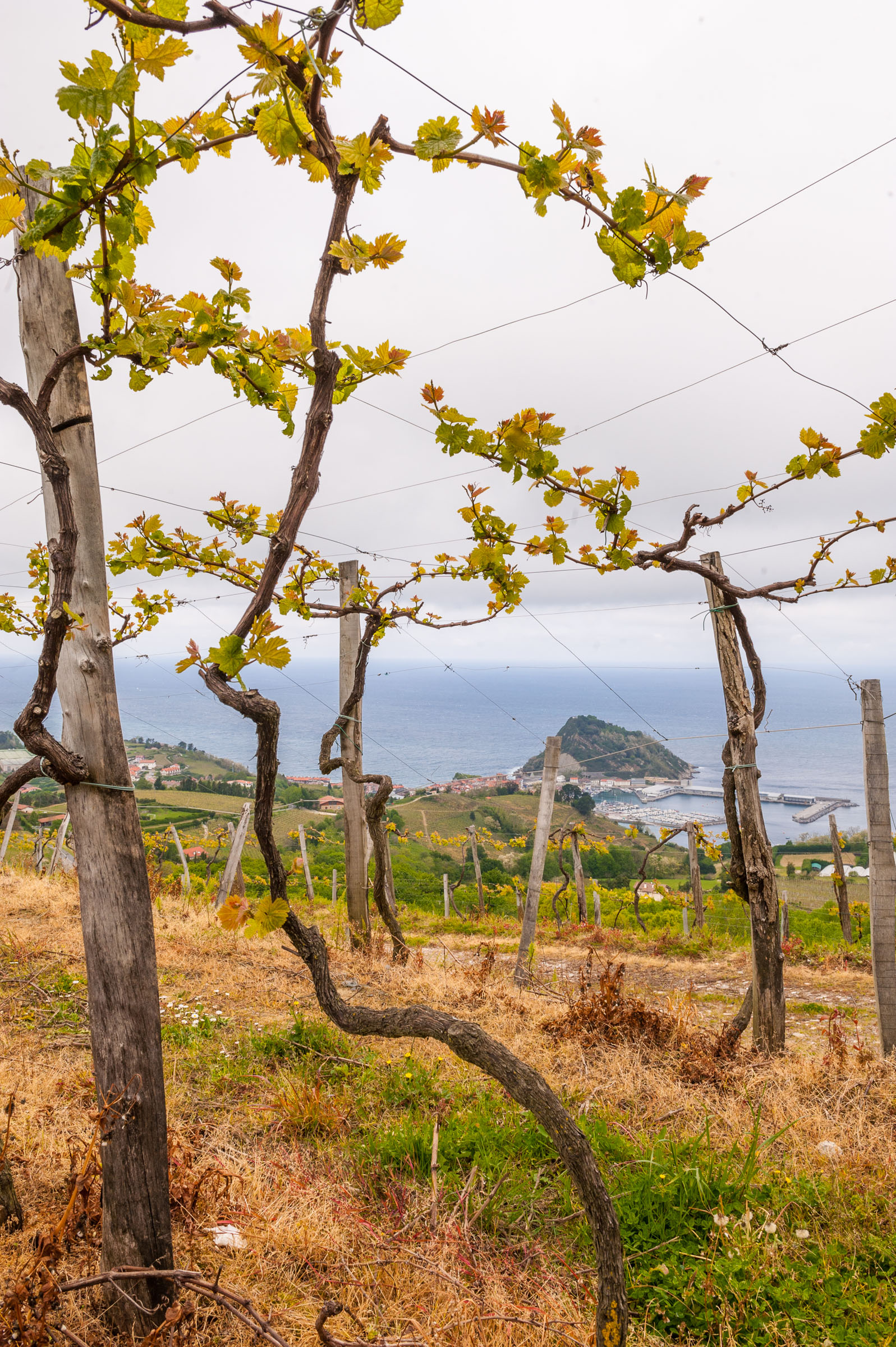 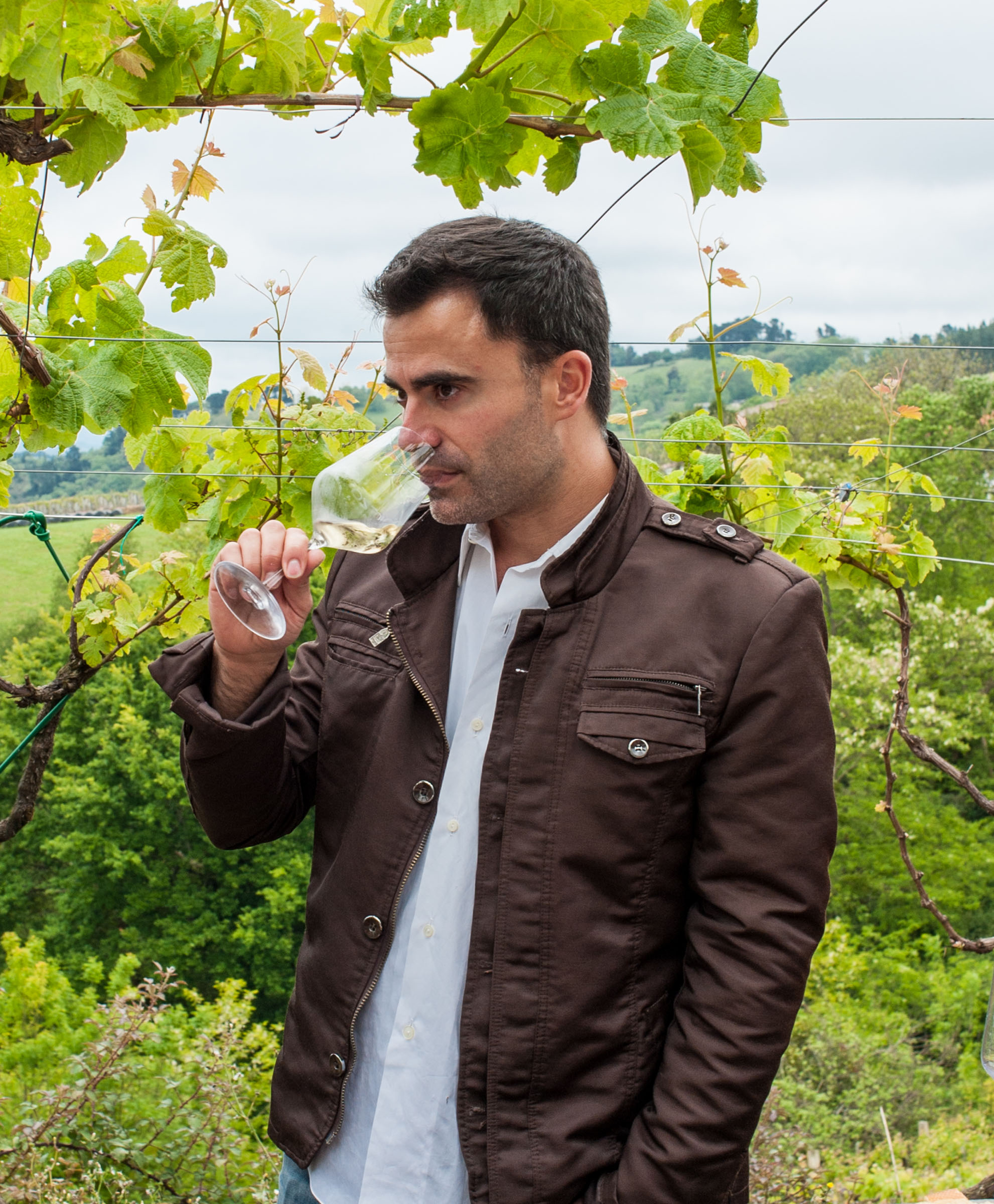 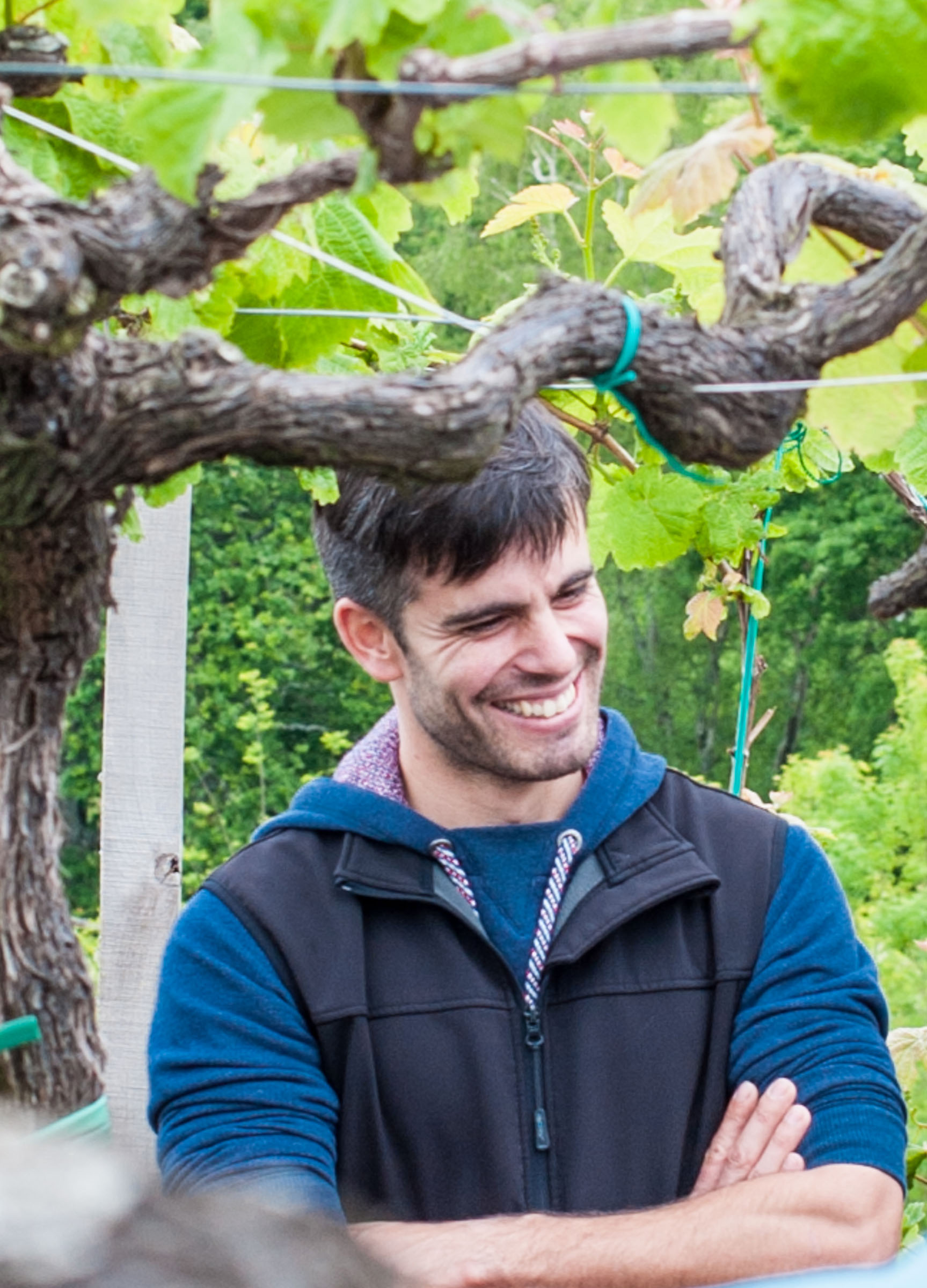 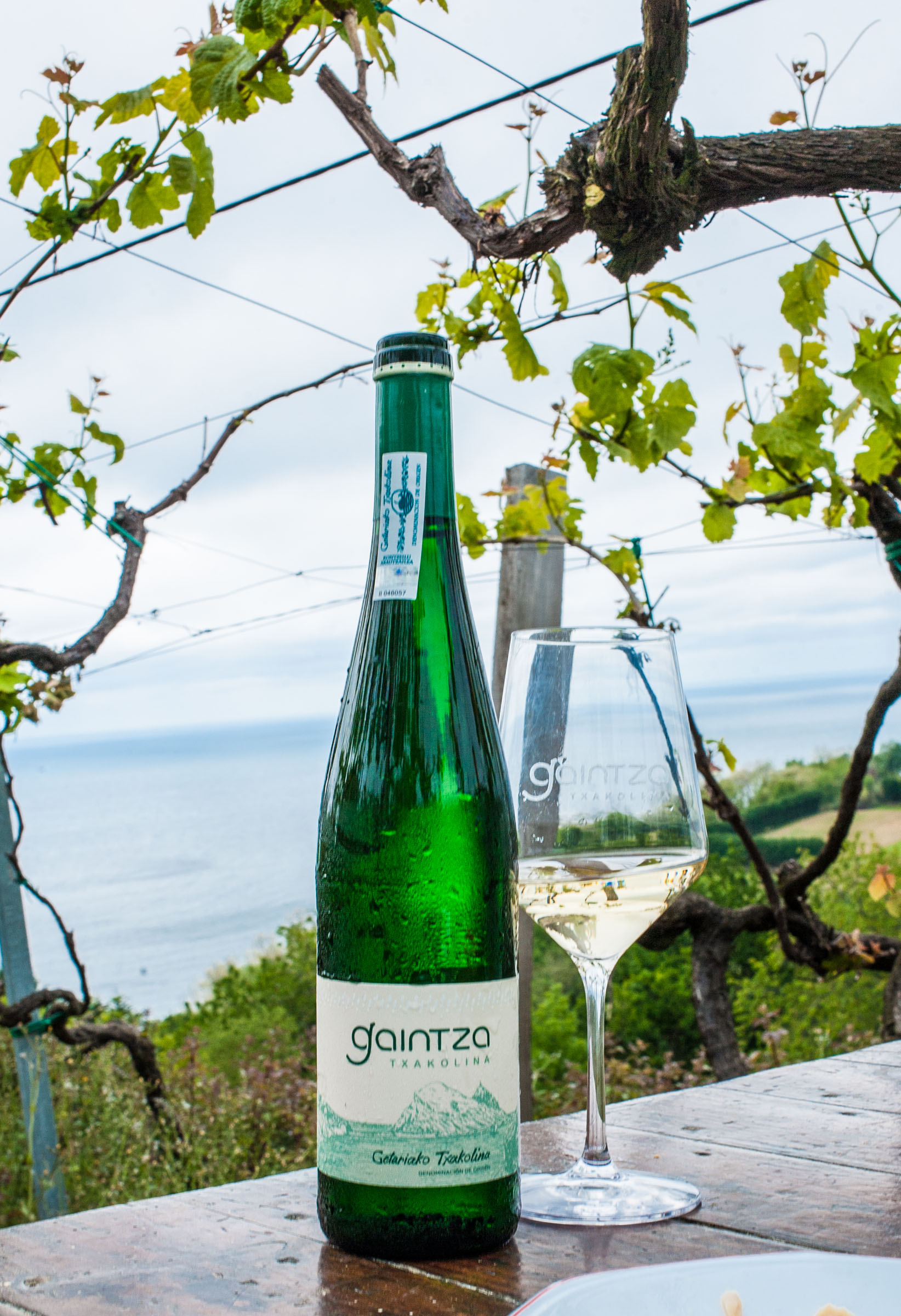 Tucked away on the turquoise-hued banks of northern Spain’s Cantabrian Sea sits the small yet fierce Getariako Txakolina DO. Here, sandy beaches and thick, salty air attract surfers and beach-goers alike, each in search of rough waters, rugged terrain, and classic coastline rusticity. It is also here that the Lazkano family has been farming three separate single-vineyard plots for nearly a century. The estate was first founded by Andrés Lazkano back in 1923. At the time, Andrés made small amounts of Txakoli wines from vineyards located along his farmhouse and sold them to neighboring towns nearby. Since then, the winery has significantly expanded and is now on its fifth generation of winemakers, who continue to highlight the one-of-a-kind growing area of Getariako, where the family name is synonymous with pioneering of the region.

Unlike other Spanish viticultural zones which are better known for their boisterous reds and still white wines, in Getariako, effervescent bottles of spritzy, saline-tanged whites reign king. The Lazkanos farm their 25 hectares of Hondarrabi Zuri, Hondarrabi Beltza, and Gros Manseng all organically, producing wines from 100% estate fruit. Although handfuls of new wineries have been popping up all over Spain, at Gaintza, five generations worth of knowledge has been passed down through the family’s lineage, with each one adding an overwhelming sense of regional tradition to every bottle produced. And it doesn’t stop there. In addition to vinifying top-quality juice, the Lazkanos are also huge pioneers of local enotourism. Within the last ten years alone, the family has opened the Gaintza Hotel Rural, with the goal of sharing their breathtaking region to as many consumers as possible. In the local dialect, ‘Gaintza’ means ‘on top of,’ which pays homage to the aspect of the winery, which overlooks the rugged coastal terrain marked by rocky bluffs and cerulean waters.

At Gaintza, respect and passion for the land always come first. The family’s 25 hectares of organically farmed vines are all heavily influenced by their proximity to the Cantabrian Sea, which provides cooling, saline-tinged breezes to grace the vineyards. The traditional regional varieties of Hondarrabi Zuri and Hondarribi Beltz are cultivated, as well as small amounts of Gros Manseng and Chardonnay. Vineyards located along the Basque Coast are generally characterized by a maritime climate, high levels of humidity, clay soils, and proximity to salty sea-influenced air.

At Gaintza, vineyards are located within the Gipuzkoan municipality of Getaria and are dominated by limestone and clay loam soils. The vines average 40 years in age and are equally influenced by the climatic effects of the Garate mountain. Average rainfall within the region is relatively high, which creates a rather wet and soggy climate. This allows for thick vegetation to develop, which in turn, protects soils from erosion and allows for extensive biological and microbial activity. Average annual temperature is just 60F (15C), which keeps acidity in grapes naturally high.

In the cellar, emphasis is always placed on the preservation of regional traditions. Although some vinification technologies have been adopted, sticking to family roots and classic vinification techniques remains key. Fruit is only harvested once it reaches ideal phenolic ripeness, which brings citrus-driven flavors and moderate levels of alcohol to the final wines, which reflect the place and vintage from which they come.

At Gaintza, wines are fermented for 45 days in temperature-controlled stainless steel vats with malolactic fermentation blocked. After eight months of lees aging in steel, the wines are bottled and carefully sealed with a micro-granulated cork, which helps preserve a light natural carbonation in bottle. The wines only age for a short period of time prior to being released, as these bottles are meant to be consumed in their youth. The overall mentality behind viticulture and vinification at Bodega Gaintza can be summed up in four fundamental pillars : integrated viticulture, integral production through use of estate fruit, respect for the land via sustainable farming practices, and preservation of regionally identity and family values through the creation of authentic txakoli wines.

Getaria is a subzone located within Spain’s Basque country, located on the crystalline shores of the Cantabrian Sea. Here, vineyards are generally cultivated at 500-1600 feet (150-500 meters) above sea level and are greatly influenced by saline-tinged sea breezes. Soils are limestone and clay dominant, which help retain water and nutrients for the vines. Overall climates are mediterranean and wet, characterized by high annual rainfall and little diurnal temperature variation due to ocean proximity. Average annual temperatures hover around 60F (10C), which aids in the preservation of natural acidity within fruit. Viticultural zones located in the Basque Country are best known for their production of txakoli wines. These spritzy, high-acid bottles are often compared to those of Muscadet and Vinho Verde, as their low ABV, effervescent nature, and citrus-driven flavor profile make them the perfect pairing for fried seafood, oysters, and other raw bar favorites.